So what should you do if you’re larger than a K cup? – UPDATE

Things go fast and a lot has happened since I wrote this post: some lines have been discontinued, others have been introduced, new bra blogs have appeared… Several readers have written to me recently, asking for advice about very large cups. I’m glad to oblige, so let’s go back through the options I presented back then:

For going braless, wearing and ill-fitting bra and altering your bras, I’ll redirect you to my original post. When it comes to custom-made and ready-made bras though, much has changed.

You can still order PL bras (padded plunges) from Ewa Michalak up to a 75LL (34LL) and sister sizes. What’s new is that you can also order an S bra (padded balconette) in those sizes. Even better, unpadded Ewa Michalak bras are now available to those on the bustier side and to plus size beauties as well with the recent launch of the FB (Full Bust). Be sure to check out my review.  The FB starts at a 75KK and goes all the way to an 85MM and sister sizes. To order a bra size that is not on the roll-down menu from Ewa Michalak, you’ll have to send her an email, pay an extra fee and your bra won’t be returnable.

If you’re on the slimmer side, don’t be jealous of the wonder that is the FB. Another Polish manufacturer, Comexim, has also extended their size range. They now go up to a 34KK and sister sizes… Great news if you wear, say a 32L or 30LL and had been altering your bras so far. Upscale sister brand Anna Pardal also offer all those sizes. Their new website is to die for.

You may also be interested in Polish brand Nessa, distributed by Finnish retailer Lumingerie. Their continuity model Selena is available in an extended size range. 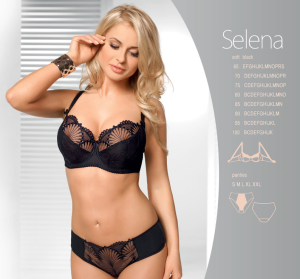 I haven’t had a chance to try them, so for more info about sizes, get in touch with lumingerie. They speak Finnish and English.

On the British front, I’m sad to report that Panache has discontinued the Melody and haven’t replaced it with any KK cup model, although just like the Harmony, they can still be found on eBay. K is now the largest cup size produced by the main UK full bust bra manufacturers (Panache, Freya, Curvy Kate). The exception is Bravissimo, which has come up with new models up to an L cup. On top of their best-selling balconette Alana, they’ve introduced several models over the year, including balconettes and full cup bras. This Winter, they offer the Peony.

In my original post, I advised trying bras that are known to run large in the cup or small in the band. Bras that can be added to that list include Panache Floris (up to one cup large depending on the colourway) and Bravissimo Floral Haze (small in the band and available up to an L cup!).

Curvywordy, Weirdly shaped and Bras and Body Image are still around. You might also want to check Xelestial Curves. Edited to add another great K+ blog I’ve just discovered Rolls and Curves.

2 Responses to So what should you do if you’re larger than a K cup? – UPDATE